It’s a scary time for established companies. Today, industries are disrupted virtually overnight as hungry startups introduce new ways for customers of accessing the goods and services they want. Often, these disruptive companies belong to the collaborative economy: the powerful, billion-dollar movement where people get what they need from each other, peer to peer, instead of going through companies and other traditional means.

Many experts, including Jeremiah Owyang himself, believe that the collaborative economy is the biggest shift in the business landscape since the internet itself. I agree. Companies that want to remain relevant need to pay attention to the likes of Uber, Airbnb and WeWork and should evaluate their business models now.

Vision Critical, the company I founded more than 15 years ago, is the world leader in cloud-based customer intelligence software, and we work with many multinational enterprises. Recognizing that many of our customers are at risk of becoming irrelevant in this new reality, we’ve commissioned The New Rules of the Collaborative Economy, a definitive, in-depth study that looks at the sustained rapid growth of collaborative companies. The report is co-authored by Jeremiah and by technology strategist Alexandra Samuel. It provides hard data on why customers are attracted to the collaborative economy and offers specific recommendations on how companies can thrive in this new reality.

Drawn from input from more than 50,000 North Americans, the stats in the report are staggering:

So what exactly is attracting people to collaborative consumption?

Experimentation is one of the leading factors. The study looks at 13 categories of sharing and found that for each category, about two to six percent of sharers who have previously tried that category skipped it in the last 12 months. But they’re not doing so because of dissatisfaction. Indeed, these same people are using other forms of sharing. Often when people abandon a sharing category, it’s not because they’re turned off by the collaborative economy; they simply have no need for the service. As Jeremiah and Alex write in the report, “If you’ve been waiting for sharers to get disaffected by the collaborative economy and come flooding back to their traditional buying habits, you’ll be waiting a long time. Sharing is here to stay.” 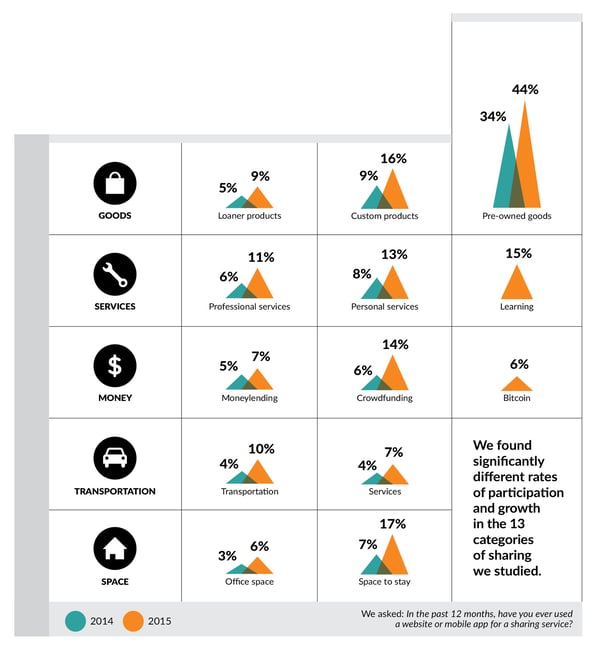 Instead of sitting by the sidelines, companies need to figure out ways of combating or complementing startups in this space. Companies don’t need to completely change how they do business in order to compete with the likes of Instacart, Airbnb or Uber. However, they do need to evaluate how they interact and provide value to their customers. Some brands need to make adjustments and some might need to completely rethink their go-to-market strategy. The report provides clues valuable to companies trying to confront or embrace the collaborative economy realities head on.

Ultimately, the companies that succeed in the collaborative economy are those that really get today’s empowered customers. These companies accept that customers today are in charge of the customer-brand relationship. Customers have a lot of choices available to them and they want to be heard. In the hyper-competitive era of the collaborative economy, it’s not enough to know what, when and how your customers buy. It’s more crucial to know why they do what they do.

The real driver of success in the collaborative economy is not technological innovation.

That’s why the real driver of success in the collaborative economy is not technological innovation. Collaborative startups like Lyft and Instacart aren’t getting billion-dollar valuations because they’re more technologically advanced than the big transportation and hospitality services that existed long before them. These startups are dominating because they’ve uncovered insight about today’s customers. Ultimately, that understanding of the customer is what will give companies sustained competitive advantage in the age of the collaborative economy and beyond.

Soccer-Zen is powered by people, to get involved, join our community, tell us how you want to be involved. Are you a passive fan, who just wants to receive updates on the teams? Do you want to try out and become a player? Do you have coaching or administrative skills? Are you a builder, do you want to help us promote and market the teams? Whatever your level of interest, let us know, we will reach out to you and bring you onboard.